What is xkcd “Time” all about? 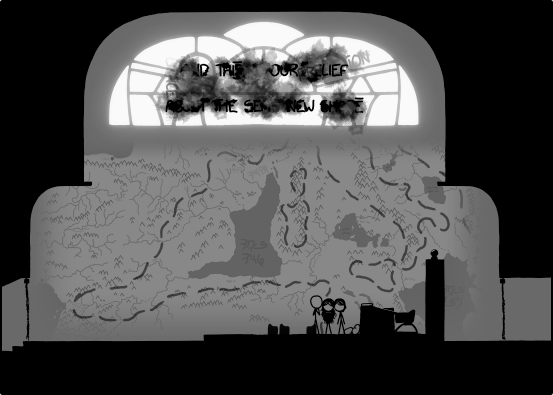 You can’t go far on the Internet these days without coming across the webcomic, xkcd, by Randall Munroe. Three times a week, he publishes comics giving a twist on science, pop culture, and general knowledge, that are amusing, informative, and at times pretty cryptic. Every so often, he posts something that reaches epic proportions. One of his most spectacular creations was comic number 1190 — “Time.”

At first glance it appears to show this particularly puzzling looking picture:

What is it? And what does it represent?

A brief history of Time

“Time” is, in actual fact, a masterpiece of storytelling that won the 2014 Hugo Award for Best Graphic Story. What you see here is the last frame in an epic series of 3,099 different images that were updated on the hour, every hour, starting on March 25, 2013. For the first five days, they were updated every half hour, but the frequency changed to hourly on March 30. It continued updating with a new picture every day until late July that year. If you click through the picture on the xkcd site, you will be taken to another website, which allows you to scroll through the images and follow the story.

The first picture was every bit as puzzling as the last. It simply showed two characters (known to xkcd fans as Cueball and Megan) sitting on a beach:

The tooltip that appeared when you hovered over the picture initially said, “Wait for it.” So we waited.

Over time, as the story unfolded, we saw them building a sandcastle of epic proportions:

As they worked, they noticed something strange: that the sea was rising. Further, and faster, than they’d ever known it to rise before.

Why is the sea rising? Where is the sea anyway? If you want to see the whole story first, head over to the geekwagon viewer. You may want to do so now because the rest of this post contains spoilers.

Eventually, our twosome decide to set off on a journey to try and find out why the sea is rising. On the way, they encounter some epic scenery, including rivers:

They get attacked by a large cat:

After fending off the cat, they spend a tense night out in the open, sleeping beneath the stars:

And finally they meet up with some people in woolly hats who speak a strange language:

The Beanie Bunch take them to their leader, who explains to them why the sea is rising:

The leader then shows them a map telling them how far she thinks the sea will rise, and at this point, all is revealed:

What happened to the Mediterranean?

It turns out that the Straits of Gibraltar had become blocked, the Mediterranean had dried up, and Cueball and Megan were members of a small settlement of just forty people living by the shores of a small, hyper-saline sea at the bottom of the Mediterranean basin, a bit like the Dead Sea of today. But now the blockage at the straits had been breached, water was starting to flow into the basin, and that was why the sea was rising.

This is something that has actually happened before. There is a lot of evidence that 5.97 million years ago, the Straits of Gibraltar were blocked up by the northward movement of the African continental plate towards Europe. This precipitated a period called the Messinian Salinity Crisis, in which the Mediterranean Sea dried up. We can see the legacy of this event in the vast deposits of halite (i.e. salt) on the floor of the Mediterranean basin, and also in large, now filled-in canyons that were carved by the Nile and other rivers that flow into it.

The Messinian Salinity Crisis came to an end about 5.33 million years ago, when the Straits of Gibraltar were breached one last time, in an event called the Zanclean Flood. It is estimated that the Mediterranean took several months to two years to fill up again, with torrents of water flowing in from the Atlantic at a rate a thousand times greater than the flow of the Amazon river. It left its mark by cutting the Straits of Gibraltar into a deep and wide channel, whose maximum depth today is 900 metres.

It turns out that the events of Time are set about 10,000 years into the future — in April, 13291 AD to be precise. What caused the Mediterranean to be blocked up this time round is not stated, but it could perhaps have been an engineering mega-project sometime in the next thousand years or so. There have been ambitious proposals made in the past to dam up the Straits of Gibraltar, lower the level of the Mediterranean, and create massive amounts of hydroelectric power and open up new lands for settlement. The likelihood of such proposals ever being implemented, however, is low, to say the least.

What happened to Cueball and Megan?

Ah, spoilers! You’ll just have to visit the Geekwagon viewer to see the whole story.

Now can somebody please make this delightful epic into a Hollywood movie?