On dark matter developers and the role of GitHub in hiring

The term “dark matter developer” was coined by Scott Hanselman a couple of years ago, when he wrote this:

My coworker Damian Edwards and I hypothesize that there is another kind of developer than the ones we meet all the time. We call them Dark Matter Developers. They don’t read a lot of blogs, they never write blogs, they don’t go to user groups, they don’t tweet or facebook, and you don’t often see them at large conferences. Where are these dark matter developers online?

Here’s my suggestion for a more precise definition of a dark matter developer:

A dark matter developer is someone who has not made any evidence publicly available that they are able to do what their CV and LinkedIn profile claim that they can do.

This is pretty much the point that Troy Hunt makes in his blog post, “The ghost who codes: how anonymity is killing your programming career.” To be sure, he does throw in a curve ball where he confuses passion and competence, and I did take him to task on that one at the time, but that aside, the whole point he was making was actually a valid one. What evidence have you made publicly available that you really do have the skills listed on your CV or your LinkedIn profile?

Sadly, for well over 90% of developers out there in the market for a job, the answer is: none whatsoever.

I’ve heard plenty reasons why this might be the case, but I’m yet to hear a good reason for it. For example, some people claim that requiring a GitHub account discriminates against busy people and people with families. That seems like just making excuses to me. You don’t have to spend five hours a day at it, or even five hours a week — and a recruiter expecting something of that order probably would be discriminating unfairly. But if you can’t manage to rustle up five hours in a year to put together one or two small but well-written projects to showcase when you’re looking for a job, do you really have your priorities right? 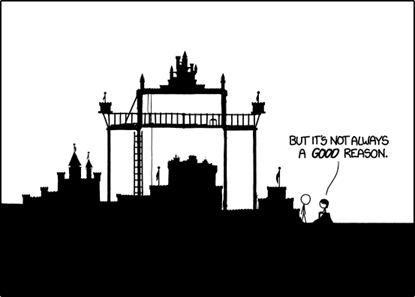 Cueball: There’s a reason for everything.
Megan: Yeah, but it’s not always a good reason.
—”Time”, xkcd

This certainly wouldn’t be accepted in certain other lines of work. You wouldn’t hire a photographer or an architect who didn’t have a portfolio, for example, nor would you take an academic seriously without the all-important track record of peer-reviewed publications in scholarly journals. With that in mind, it seems a bit odd to me that we shouldn’t have something similar in the very industry that practically invented the online portfolio. Or that having something similar, we fail so spectacularly at actually making use of it.

The gold standard here is, of course, an active GitHub account. Some people have objected to the concept of GitHub as your CV in recent months for various reasons, but none of them have come up with any better suggestions, and the fact remains that even just one or two public GitHub or Bitbucket pull requests or similar shows that your code has been reviewed and endorsed by other developers. But even if you haven’t had any pull requests, any code up there is better than nothing. Even simple snippets will do—GitHub lets you post gists on https://gist.github.com/ just by copying and pasting from your IDE to your browser. In the absence of code itself, informed discussions about programming still carry some weight. A blog, or some answers on Stack Overflow, are both ways of supporting your credentials.

In the end of the day, being a dark matter developer probably won’t stop you getting a job, and similarly an online presence won’t guarantee you one. It simply isn’t feasible at this stage to systematically reject everyone who isn’t on GitHub, as some people advocate — especially in the .net ecosystem which is still frustratingly conservative and traditional. But having some code publicly available for hiring managers to review could certainly make the difference between your CV being noticed and it being lost in a pile along with thirty other CVs that all look exactly the same as each other. Besides, things are changing, and I sometimes wonder — five years or ten years from now, might dark matter developers end up finding themselves unemployable?