We are the (Face)Borg. Resistance is futile.

It’s now just under eighteen months since I closed down my Facebook account. At the time my main concerns were identity fraud: Facebook’s reputation when it comes to its users’ personal data leaves a lot to be desired. So when Quit Facebook Day came along, I decided to do just that. I went for full deletion in the end rather than just deactivation, so that account is now history. 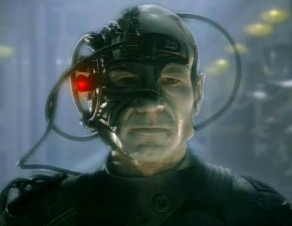 This move turned out to be nothing short of a disaster.

The thing is, for all its foibles, Facebook gave my social life a much needed leg-up, and it helped me to connect with people whose existence would otherwise have completely passed me by. I wouldn’t describe myself in quite the same terms as Martin Fowler and Jeff Atwood describe themselves — they use terms such as “misanthropic hermit” or “borderline sociopath” — but let’s just say that partying has never been my strong point. On top of that, family considerations and a long commute mean that my opportunities to get out and about are pretty thin on the ground, and a bout of illness at the start of this year compounded matters even more. Furthermore, within a month of Quit Facebook Day, Kingdom Faith Church, of which I am a member, started using Facebook for much of its news and events.

It’s been a lonely, depressing eighteen months. I’ve felt far more out of touch with those closest to me than I should be.

No realistic alternatives whatsoever have presented themselves in that time. Diaspora was killed off before it started by being written in Ruby on Rails. Twitter has turned out to be a complete ALT.NET geek-fest, to such an extent that on several occasions, my non-programmer friends at church have complained to me that they haven’t a clue what I’m tweeting about. And while it’s early days yet, although quite a few people have added me on Google+, almost none of them are using it for anything other than to make snide remarks about how people aren’t using Google+.

Note 2: If it looks bare, that’s because it’s new. This is the first time I’ve published the URL, and I haven’t started friending anyone yet.