Rear airflow rucksacks are a nice idea, but…

My daily commute consists of a fifteen minute bike ride to Horsham station, fifty-five minutes on the train into London, and a twenty minute walk from London Victoria to the place where I spend most of my day staring at a computer screen before repeating the process in reverse. When you’re spending a little over three hours a day getting from A to B and back again, it’s essential to have a suitable means of humping your assorted bits and pieces around, so before I embarked on this particular adventure, I paid a visit to Millets in Horsham town centre and bought myself a rucksack that I thought would fit the bill perfectly. 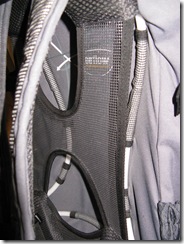 At the time I thought the rear airflow system of the Berghaus Freeflow 20 rucksack was a bit of a killer feature. My old rucksack (which was ten years old and falling to bits) had been giving me a sweaty back on my bike all summer, and I figured that since my daily quota of exercise was just about to double, anything to reduce that effect would be more than welcome.

Unfortunately, this comes at a price. The struts that hold it away from your back seriously reduce the amount of space that you have at your disposal. Most of the time it isn’t too bad, but sometimes it seems very inflexible somehow. There are occasions when I want to be able to take a couple of books with me as well as a change of clothes for the journey home if the weather deems it necessary to do so, or maybe even just stop off for some shopping. Thanks to the way they curve away from your back, my Microsoft Natural 4000 keyboard almost refused to fit into it at all. Helpful, that was not.

So last week I went and bought another new rucksack. It’s a different Berghaus model, without the rigid struts this time, which makes it much more flexible, as well as giving it a a slightly higher capacity of 25 litres instead of 20. Despite the lack of air flow between it and my back, so far it hasn’t been making me sweat like crazy, but then again, I have been getting a better diet in recent months than I was a year ago, when I was having KFC for lunch almost every other day.