Is it time to kill off wikitext?

Anyone who has ever tried to edit Wikipedia will have encountered wikitext, the rather esoteric syntax used for markup on its pages.

Wikitext is, in theory at least, simpler than HTML. Two single quotes delimit ''italics'', while three single quotes indicate '''bold text'''. [Square brackets] indicate external links, [[double square brackets]] indicate internal links, and so on. A lot of other wiki software uses similar syntax. For example, Trac, a popular open source bug tracking system, uses a very similar markup language, and since you can also embed HTML in it, and even use a fairly sophisticated macro language, it allows very fine-grained control of the contents of the page. For the novice, there is a helpful toolbar at the top of the edit box, so that you can easily mark up various parts of the text as bold, italics, hyperlinks, and so on. 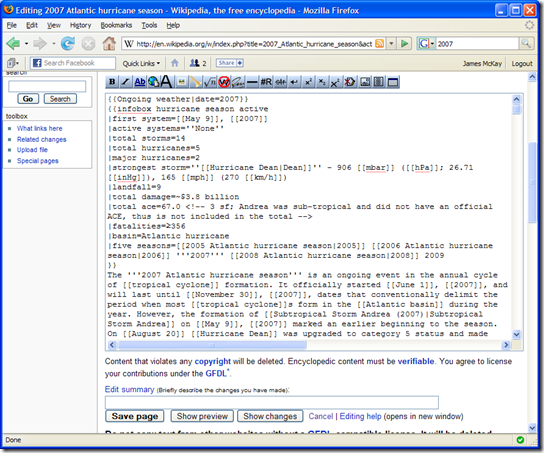 However, in late 2007, it somehow feels wrong. As wrong as it felt not being able to get broadband in late 2005.

Perhaps there is a place for wikitext, as a fallback to improve accessibility when JavaScript is not available. And some things are simply not possible (yet) without it, such as typesetting mathematical equations. However, in terms of usability, it sucks. Apart from having to navigate away from the main article page, you have to scroll through the box to find the part of the wikitext corresponding to where you want to make the change (not obvious in an article with a lot of footnotes, references, tables and the like). It also creates a distinct range of systemic biases, which is a problem that Wikipedia itself acknowledges. How much nicer it would be, if clicking on “edit” on a section of a wiki page were to bring up an in-line rich text editor where what you see is what you get.

Web browsers have now had rich text editing capabilities for over seven years. This feature was first introduced in July 2000 in Internet Explorer 5.5, and nowadays every major browser supports it one way or another. It needs a lot of fiddling about with JavaScript in order to work properly on all of them, of course, but there are several popular and mature libraries and components such as FreeTextBox, TinyMCE and FCKeditor that handle this very well, so that’s pretty much a solved problem. Even cleaning Word HTML and producing valid XHTML — once common objections to rich text editors — are solved problems too.

There are many rich Internet applications these days that raise the bar significantly in terms of quality of user experience. Slick, good looking, easy to use sites are becoming more and more commonplace, and while ones such as Google Maps or EyeOS still have a bit of a “wow” factor, it’s getting easier all the time to develop them. With libraries like jQuery, for instance, you can implement a Google Suggest-style Ajax search facility in a couple of hours.

With it becoming increasingly easy to create elegant rich Internet applications, and the tools to do so being readily available, free and open source, having such an awkward and clunky way of editing content is beginning to look very last millennium. It’s time it went the way of the dinosaurs.