Regular readers of my blog will no doubt be aware that over the past eighteen months or so I have been fairly active on Wikipedia, notching up just under a thousand edits or so.

This may sound like a lot but it is not uncommon to find Wikipedians with edit counts reaching well into the tens of thousands, so I am not the most active by a long shot.

However, I have decided that it is time to call it a day.

The main reason is to help me stay focused. Editing Wikipedia and participating in all the discussions etc can be fun, but it can also be pretty distracting if you are not careful. It is also all too easy to get lost in all the masses and masses of trivia that are to be found there: if you have ever gone on to it looking for information about cryptographic hash algorithms and ended up with a dozen articles open at pages such as Jennifer Aniston, Self Diagnosis and Eta Carinae after five hours of fascinated clicking, having totally forgotten what you went on to Wikipedia for in the first place, you will know exactly what I mean. 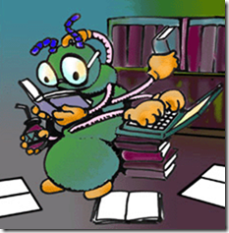 “Computer Joe” Anderson wrote a blog entry recently in which he attempted to debunk some “myths” about Wikipedia (or “the Wikipedia” as he calls it). It’s gives an interesting insight into Wikipedian culture that most casual readers have no idea about, such as the recent changes patrol and the Arbitration Committee. However, while his arguments are all factually accurate, I must disagree with his conclusions. Despite all its processes, policies, procedures and patrollers, Wikipedia still has very much the feel of being the Wild West of encyclopedia territory: chaotic, anarchic and at times pretty bewildering.

I must admit to finding it curious that Wikipedia policy states in no uncertain terms that “Wikipedia is not an indiscriminate collection of information.” After all, as far as indiscriminate collections of information go, Wikipedia has few rivals. After all, when you encounter articles like Globus Cassus — an obscure book that you’ve almost certainly never heard of, which outlines a completely whacked out and bizarre proposal to dismantle the earth and use it to build a flying saucer the size of Saturn — and then discover that it survived not just one but two deletion debates, you just have to shake your head and say to yourself, “Only on Wikipedia”. But it turns out that it featured at one of those highfalutin modern art exhibitions where you expect to see cows in formaldehyde, piles of bricks, and avant garde paintings by elephants and chimpanzees. Apparently that makes it Notable. Go figure.