A couple of weeks ago I was treated to two new monitors — 20 inch wide screen flat Dell offerings, each with a resolution of 1680×1050 pixels. These replaced a couple of excruciatingly old CRT behemoths that were occupying three quarters of my desk.

The new monitors can rotate on their stands, so you can have them in either a portrait or a landscape orientation. After a little bit of experimentation, I’ve plumped for having both of them upright. 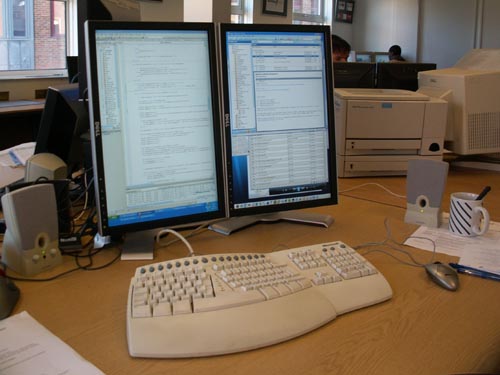 This arrangement really comes into its own for coding: you can see ninety lines of code on one screenful without compromising clarity. This is quite helpful when you encounter a gargantuan 1,600-line function with loops and if statements a dozen levels deep, written by someone who has never read Martin Fowler’s excellent book on Refactoring.

The only thing is that having them vertical slows down the graphics card a bit for some reason — but since I’m not playing video games or watching DVDs at work, that doesn’t really matter. It’s also a bit odd when the machine boots up because the Windows splash screen appears on its side.

Some people like to have three or more monitors, but I’m not one of them. While two monitors are definitely much better than one, I find that a monitor arrangement that is too wide can be a bit uncomfortable when you’re constantly having to move your head through an angle of about 45° to get from one end of the screen to another. With my previous setup of two 21 inch CRT monitors, my applications all tended to congregate on the left hand screen, and when I had the new monitors in landscape orientation it felt even more awkward. However, with them both upright, it’s probably the best monitor arrangement I’ve ever had, since it provides an optimum ratio of screen real estate to required head movement to make the most of it.