Geeky but nice — my new keyboard

Well I’ve finally done it. I took delivery of my brand new Kinesis keyboard today. It’s fully ergonomic — the keys are in curved bowls that are contoured to the shape of your hands — but man, it has prompted a few interesting comments to say the least. 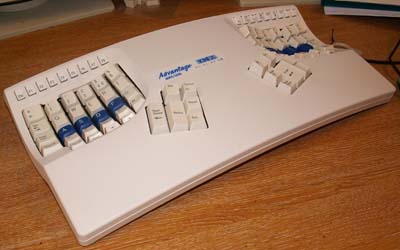 My first impression is that it is going to take a little bit of getting used to. The general consensus of the blogosphere seems to be that you spend the first three days swearing at it then the rest of your life swearing by it. Quite what I end up thinking of it after thirty days remains to be seen, but I rather suspect that it will on the whole be pretty positive. I have it on a 30 day sale or return basis, so if I decide it’s not worth the money, I can send it back.

I’ll write a fuller review in a couple of weeks’ time once I have some idea of where it’s going. In the meantime, I’ve put my plans to switch to Dvorak on ice for the time being. However, you can switch the keyboard layout on the fly between QWERTY and Dvorak, or even re-map it to something totally esoteric if you like. So watch this space…