Impenetrable Packaging of the Year Award

I needed to set up the web shop on one of the computers in our resources department this morning. This involved transferring a backup file from my laptop to their computer. Unfortunately I didn’t have any means of doing so. I used to have a USB memory stick but I mislaid that a while ago. Besides it was only a 32 megabyte one, so I decided that I ought to price another.

Fifteen minutes and a short car journey later I was in a shop in the middle of town. Lo and behold, they had exactly what I was looking for. 512 megabytes for £70 or so, or 2GB for £160. Not being particularly in a spendthrift mood, I decided to settle for the former.

I took the memory stick back to the resources offices and spent about five minutes in the car wrestling with the packaging, which consisted of two pieces of clear plastic that one would think would just snap together. At first glance it looked like it would be fairly easy to get into it, but the two pieces of plastic were so thoroughly and impenetrably welded together that five minutes of attack with first bare hands and then keys failed to yield any results. So in I head, get hold of a pair of scissors, and launch an attack on the thing. A few more minutes of wrestling finally managed to penetrate the packaging, which is now fit only for the rubbish bin. 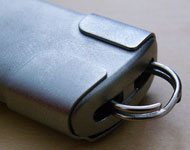 But that wasn’t all. The memory stick comes with a little ring that you can use to attach it to your keyring or a chain or something. Fine. Only problem, the ring was not attached to the memory stick. I had to do that myself, and given the size of the little ring (about 5mm across) and the slot that you had to thread it onto, this meant another twenty to thirty minutes of wrestling with the thing and turning my fingernails to pulp.

It’s very puzzling though. A lot of other products have packaging that is easy to open and re-use if necessary. So why do some manufacturers seem to find it necessary to wrap up their offerings in such a way that you need an assortment of machine tools and nuclear warheads just to get into them?